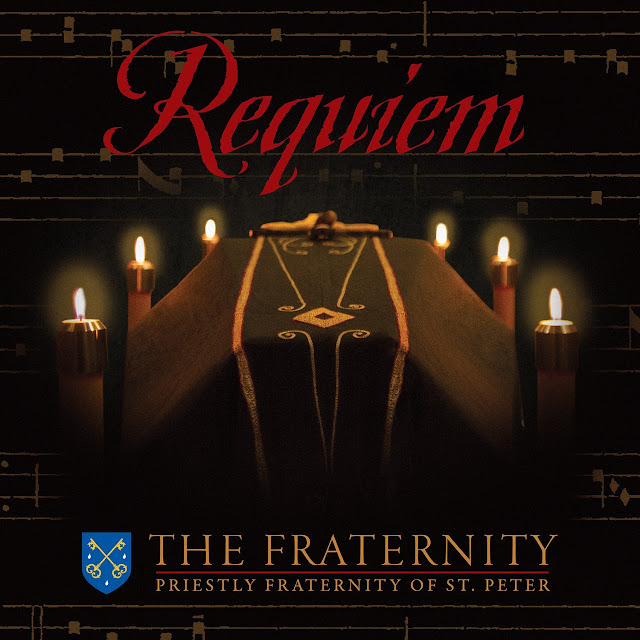 The FSSP has added a new CD to their superb collection of CDs!  Requiem is the latest addition (available for pre-order now here) and it's quality surpasses their previous works. Even though all three of my husband's brothers are Fraternity priests (you can see pictures from their ordinations here, here, and here!) our family doesn't have an FSSP parish in our state and CDs like this are such a beautiful and welcome addition to our home. (We are grateful to have access to the extraordinary form of the Mass once every other month and a Sacred Liturgy Conference coming up this summer!) I'm especially looking forward to hearing them chant the Antiphon: In Paradisum, one of my favorites. Here is a great video along with the press release for this new CD. Be sure to scroll to the bottom to enter the giveaway for a chance to win one of three copies of Requiem!

An international community of young priests known as The Priestly Fraternity of St. Peter, or "The Fraternity" as they have lovingly been referred to, includes some of today's most skilled and committed singers of Gregorian chant. The community has been preparing to present ancient melodies anew, on the album Requiem, to be released on May 12, 2017 through their new international collaboration with De Montfort Music/Sony Classical.

Many have heard The Fraternity sing Requiem chants at funeral Masses over the years, often suggesting that the group, who is so close to this treasured music, record this moving collection. The decision to make their major-label debut with the music of Requiem was unanimous among the priestly singers, as they know well that nothing is so universal as the experience of death, the care of souls and as well the many emotions evoked by the living. The text of the Mass – beginning with "Requiem aeternam dona eis, Domine" (Grant them eternal rest, O Lord) – is spiritually uplifting, meant to convey souls to a particular vision of the beyond; the effect of the music is far-reaching and timeless, bound to touch the deepest emotions of any human heart.

Requiem, the debut major-label release by The Fraternity, was recorded by two of the top talents working in classical music today: multiple Grammy Award-winning producer Christopher Alder and engineer Brad Michel, also a Grammy winner. The executive producers of Requiem are Kevin and Monica Fitzgibbons of De Montfort Music, which has helped cultivate a new audience for ancient choral music by developing several chart-topping albums of Sacred Music. The industry veterans had this to say about the Requiem recording, "It has been an honor to work with The Priestly Fraternity of St. Peter, as they are excellent ambassadors for this repertoire- they are intimately familiar with this music- thus its deeper meaning is inescapable throughout the album-and the care and excellence that they brought to recording this Requiem is an inspiration."

Fr. Gerard Saguto, the North American Superior of The Fraternity who also sang on Requiem, explains that the daily responsibilities of the priests entail shepherding its flock's greatest joys and its deepest sorrows, from a marriage in the morning to a funeral in the afternoon. St. Augustine's sense of the sacred was a beauty "ever ancient, ever new." This beautiful work that's ancient yet made anew whenever he and his confreres sing it – serves as a message of hope. And for Fr. Saguto, this new recording of the Requiem – was "a way to share some of what we do on a wider scale, to put something beautiful and sacred out into the world."

This recording transfigures the sound of mourning and remembrance into something mystical and beautiful, inspiring a feeling of hope in the cycle of life and an embrace of the eternal through the gift of meditative song. Requiem is a uniquely curated presentation, comprising 20 tracks of sublime melody, mostly monophonic Gregorian chant but concluding with the lush sound of polyphonic motets by the great 16th-century Italian composer Palestrina and a less well-remembered 18th-century composer, Giovanni Battista Martini, one of Mozart's teachers.

Fr. Zachary Akers, music director of The Fraternity and a singer on Requiem, explains the relationship of the words to the melodies by noting, "I've heard it said that the music is meant to 'clothe' the texts." Although most people may only know the Requiem via the celebrated version by Mozart, the composer was himself inspired by the somber beauty and unadorned profundity of Gregorian chant, taking it as an emotional-aesthetic standard. Fr. Akers explains: "In this album we are hearing this type of music that was around long before Mozart, approaching the beginning of sacred music."

Fr. Garrick Huang, co-music director of The Fraternity and a singer on Requiem, reflected on the roots of Gregorian chant, saying: "The style of chant that we sing go all the way back to ancient Rome, but it even has its sources, as certain people believe, in Jerusalem, with certain melodies Middle Eastern in origin. Rome has been cosmopolitan for centuries, of course, so it has always been a crossroads of many cultures. So there are even some sounds that we could say come from the East (Byzantine), or even different parts of the eastern empire." Fr. Huang points out that for monks down through the centuries, it was never enough to simply recite the sacred texts: "We sing them, because it has always been part of human nature to express love and joy, despair and sadness – the gamut of emotions – in song. That said, the Requiem chant is not a performance for us. We say that we 'sing' the Requiem, but it's more that we're praying the Requiem."

Christopher Alder, who has worked with some of the greatest classical singers of the past 30 years, echoes this idea that the words and melodies of the Requiem chant are deep inside the members of The Fraternity. "This community has obviously put a lot of emphasis on concentrated musical training in their education of young men to become priests," he says. "They know this material intimately, as it rolls out of them as if it were poetry that one has recited countless times. They know it by heart, in every sense of the term because the text is being simultaneously believed and sung at the highest level."

About The Priestly Fraternity of St. Peter

The Fraternity began in 1988, from its roots in Rome, the community has spread far and wide, now including some 280 priests in missions worldwide. They are a youthful community, with 35 being the average age of its priests. They are located in missions and parishes around the world including Germany, Great Britain, Nigeria, France, Colombia, Switzerland, Austria, Italy, the USA, Australia, Canada, Netherlands, Mexico, Poland, New Zealand and Belgium. In 2017, The Fraternity will ordain 17 priests: 7 in the US, 7 in Germany, 2 in England and 1 in Nigeria. The Roman Catholic community of priests is an ambassador to the world of the treasured traditional Mass in Latin, as well as specializing in Gregorian chant. For more information visit: www.FSSP.com.

De Montfort Music has generously offered to send three of my visitors here at Shower of Roses a copy of this brand new CD! This giveaway will remain open through Divine Mercy Sunday, April 23, 2017. The winner will be announced in this post and contacted by email on Monday, April 24, 2017.


Please enter the giveaway using the Rafflecopter box below:


Pre-order a copy of REQUIEM over at Amazon.
You can also order directly from The Fraternity here!