The other day I was scrolling through the camera roll on my phone and ran across this photo. I took it one afternoon last September and never did get around to sharing...  I had just made my lunch - an AIP approved salad with lettuce, turkey, avocado, carrots, and sauerkraut, topped with olive oil and raspberry balsamic vinegar - and was getting ready to read aloud from some of our history books for the month.

Anyway, the reason I am sharing it now is because my older kids have been reminding me that, if anyone is looking for book recommendations, I "must recommend Word to Caesar!" 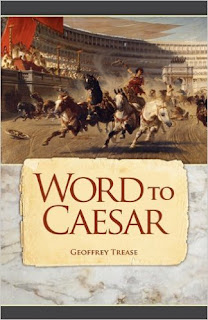 "Set in Imperial Rome at the time of Emperor Hadrian, a teenaged boy travels across the Empire from his home in Britain to seek an audience with the Emperor. Along the way he meets up with the villains who are trying to stop him, a famous charioteer who helps him, apathetic solicitors who won't help him, and finally the Emperor. At every step of his adventure, he remains loyal, demonstrates courage and prudence, and does not give up even when it seems impossible."

Originally published in 1965, Word to Caesar has been republished by Hillside Education.


Word to Caesar was actually one of the books that our oldest received in his Stack of Books on Christmas morning (2014). I love sneaking some "school books" into Christmas gifts and Easter baskets.  I read it aloud and there were a couple parts that I edited a bit for my younger listeners, but overall we enjoyed it tremendously. I do agree with the four-star reviewer over at Amazon that the beginning is "a little bit unneeded" and that "sometimes the author doesn't focus enough on important facts, and sometimes he focuses a little bit too much" but at the end of each chapter (following the discussion questions included in this reprint from Hillside Education) the kids would beg me to read "just one more chapter... please!!!!"

P.S. Today is the last day to enter this year's Baskets of Books for Easter Giveaway!