I didn't think I was going to be able to pull it off this year, but this morning I woke up feeling better (I have been pretty sick since the first) and decided I could at least make cupcakes for the children to celebrate Epiphany! I quickly baked the cupcakes, and then decided to keep going. Pretty soon everything had fallen into place (thanks to a bit of pre-planning) for a simplified version of last year's Twelve Days of Christmas Dinner party to go along with some Pasta and Salad. I have a few pictures to share with you all before I am off to get some more rest. 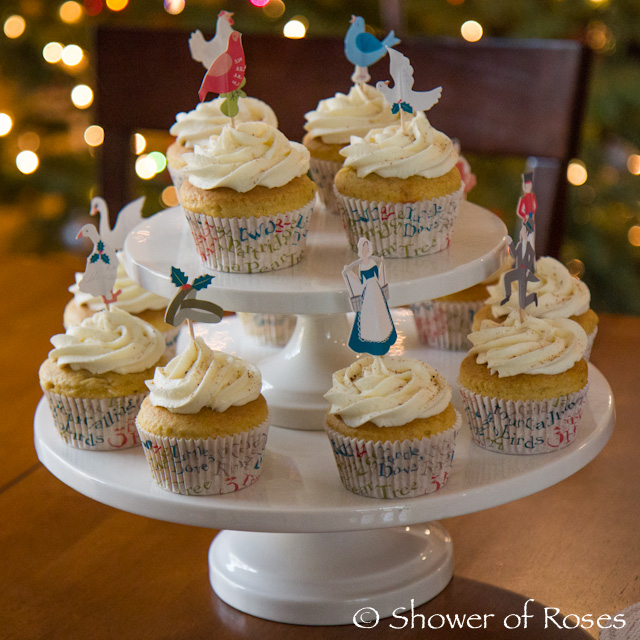 Bud was quick to claim his cupcake, just as soon as I turned my back for two seconds! :)

Nine Ladies Dancing = 9 Fruits of the Spirit
I wasn't up for a trip to the grocery store for fresh fruit, so I pulled out 9 different fruit flavored Polish candies from the large bag we were given from Father K's Polish mother when she visited!

Seven Swans A-Swimming = 7 Gifts of the Holy Spirit
A nice big salad to go along with all the treats. . .
The only connection this salad has is that I made sure it had seven ingredients :)

Six Geese A-Laying = 6 Days of Creation
Deviled Eggs made another yummy and healthy addition to the party and tied in nicely.

Three French Hens = 3 Gifts of the Magi and/or 3 Virtues, Faith, Hope & Love
I just displayed the Gifts from the Magi, instead of the Epiphany Crown Cake this year. . .
(along with the beautiful puzzle nativity Bud received from his Godparents for Christmas!)

Partridge in a Pear Tree = 1 Beloved Son, Jesus Christ, on the Cross
This year instead of baking a pie, I served a Pear Tarte from Trader Jo's.

Gifts from afar to open on Epiphany! (Thank you Grandpa and Grandma G!)

Wise Men Still Seek Him. . . And one last gift to open!

"And entering into the house, they found the child with Mary His mother and falling down they adored Him; and opening their treasures, they offered Him gifts; gold, frankincense, and myrrh."
Matthew 2:11