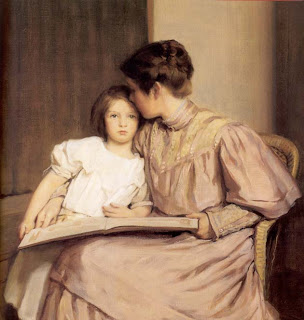 I received the following article from a friend who typed it up from an old 1992 copy of "The Catholic Hearth" to preserve and share.   It is just beautiful!

"To Teach"
by Monsignor Robert Hugh Benson
There is a tradition, probably untrustworthy, that in certain well‐known schools the new assistant master begins his career by teaching the older students advanced subjects, and ends it, if he is successful, by rising to the high levels of infants and alphabets. At any rate the tradition witnesses to a profound truth. It is comparatively easy to lecture to Plato on philosophy or to St. Thomas on theology;  but it requires almost superhuman knowledge and effort and skill to discourse effectively to children on any subject whatever.

First, there is the imarity between the mind that receives and the truth that is to be received; next, there is the extremely coarse and unsubtle instrument known as human language by which the work must be done, and this is even further limited by the narrowed vocabulary to be employed in this instance; lastly, there is the handicap of the teacher’s own more mature experience. (It is as if a man were to set out to lecture to birds on Wagner, aided only by a tom‐tom for his musical illustration.)

But there is one subject, thank God! In which these difficulties are reduced to a minimum, and that is the knowledge of God and Jesus Christ which is eternal life. The difficulties, in fact, on this subject lie in quite another direction. It is comparatively easy for a child to become a “man of understanding”; it is the difficulty for the rest of us to be “converted and become as little children” in grace. The child, like the human race in its infancy, is not weighted and hampered by the obscurity which a little disproportioned knowledge cast; it has no temptation to think that since it understands about five things, it can therefore understand five thousand, or that “what it knows not is not knowledge.” This, surely, is one reason why our Blessed Lord sets a child in the midst as our model, and laments how hard it is for “those that have riches to enter into the kingdom of heaven.” If we have nothing we are not avaricious or complacent; if we are obedient we have gained the mastery of ourselves; if we are inexperienced we think nothing too good to be true. The child then begins in hope where the wise man leaves off in despair.

This “capacity for God,” then, this simplicity, this untarnished conscience, this instinctive knowledge of helplessness and ignorance, common to all true children – these things not to be improved upon by any teacher: he can only seek to safeguard them; and, meantime, he must rather study and learn from them himself. But God has, as a matter of fact, manifested Himself upon the field of history and linked together by both natural religion and revelation those things that are called phenomena. He has shown us, for instance, what we could never have guessed for ourselves, that Himself is really and truly as much the Father of our neighbor as of ourself, that He has made us of one blood with men of other nations than our own, and most marvelous of all, that our hunger for justice can only be satisfied by Himself, who is Justice. Certainly the Christian Religion meets our aspirations, but in every point it also transcends them; for the showing of this there was needed the Incarnate Life, the Cross, the Resurrection, the Catholic Church and the sacraments.

These things then are not within the natural knowledge even of children. These enormous events, prophets and kings still desire to see before they believe, can certainly be brought within the grasp of children’s faith, yet they must be brought before they can be grasped. The child who knows, as older folks do not know, the Light that enlightens every man, does not know, unless he is told that this Light was at last set in a lantern and shone among men, outwardly as well as inwardly, a light to their paths as well as a lamp to their feet.

And for this tremendous work – the teaching to children of the greatest things in this world and the next – there is needed in the teacher all that is meant by the words “an intelligent love of children." He must understand them or he cannot teach; and he must love them or he cannot persuade.