A Visit with Santa

When we were at "The Farm" our children had the opportunity to visit with Santa, aka St. Nicholas. It was a first for them, and even though they knew that he wasn't THEE St. Nicholas, they really enjoyed it! 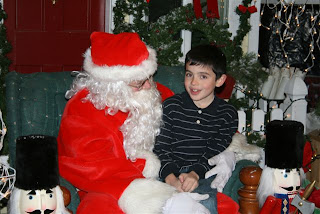 Santa, of course, asked each one of them what they wanted for Christmas. Rascal's response was the Playmobil Roman Arena

, Twinkle Toes would really like a doll, and Chiquita said, "a present!!!! With a house for my little dollies inside!" CUTE!!!!

As for Captain, his response was "A book." Santa replied, "A BOOK! Which book?" Captain said, "A war book." Afterward, Santa told me that in all his years of being Santa Claus, he had never been asked for a book. =) He also said that when he asked Captain if he would like a candy cane, he replied, "No thank you." And that that was a first too. I'll have to see what we can do about that book. ;)

Snuggles didn't want anything to do with Santa... He preferred hanging out with his Auntie Julianna. That is, until she tried to put him on the pretend pony! 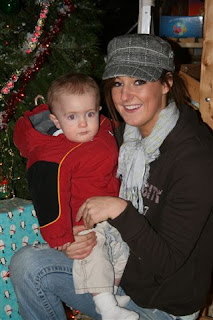 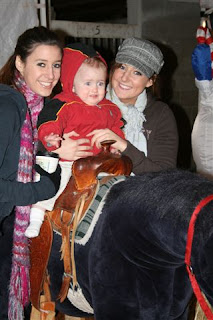