This past weekend I ran across the following picture as I was looking through a box of childhood photos. I was so excited to find it once again! This photo was taken 17 years ago at our Home School groups All Saints Party! My mom was pregnant with the twins at the time, so there were "only" 8 of us children! ;)

I remember this year well, and being so excited when my mother (who never really did much sewing) splurged (considering we were quite poor at the time) and hired a friend of hers to make us All Saints Costumes. We spent days pouring through the Picture Book of Saints

trying to decide which saint we would choose. We were THRILLED!!! 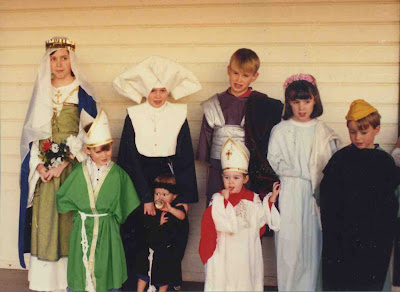 Back Row (Left to Right):
Me as St. Elizabeth of Hungary, Jennifer as St. Catherine of Laboure, Sean as St. George, Jamie as St. Lucy, Paul as St. Isadore the Farmer
Front Row (Left to Right):
Brian as St. Patrick, Scott as St. Anthony of Padua (Anthony is his middle name, and was the original Saint for this costume though it has been used as St. Francis since) and Julianna as St. Nicholas (I don't know -- maybe mom wanted to use it for Scott the next year, or maybe Julianna threw a temper tantrum.. ;)
Contest Winners: Regina figured out who it was, and named all of us first, I'm impressed! And Jamie had the most correct answers on the saints we are dressed as! I'll be mailing you both a package of M&M's!


Those costumes of ours have been used over and over for years. In fact, here is another picture I found that was taken in 1997. The babies in the last picture are now the big kids in this one and it includes the four that were not yet born: (It sometimes seems that my parents have multiple families ;) 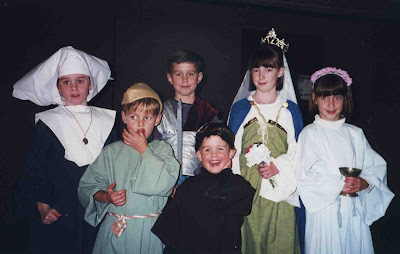 Back Row: Mary as St. Catherine Laboure, Scott as St. George, Julianna as St. Elizabeth of Hungary, JoAnn as St. Lucy
Front Row: Kevin as St. Isadore the Farmer and David as St. Francis
And even still, nearly 20 years later, most of these costumes (or parts of them) are still being used. This year Captain will be using the green cloak for his St. Patrick costume, and Snuggles will be dressing as St. Anthony.

Yes, well made and well loved costumes will last forever, and this is just one of the reasons that I see nothing wrong with spending hard earned money on great hand-made saint costumes.
Email ThisBlogThis!Share to TwitterShare to FacebookShare to Pinterest
Posted by Jessica Gordon