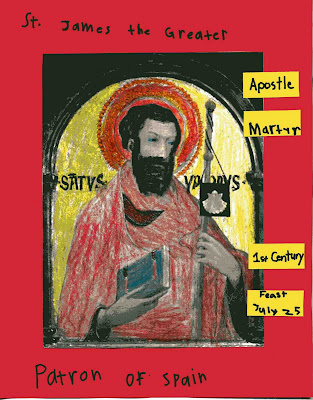 Saint James by Captain
(image found online, converted to b&w and resized)
Today was one of those days where nothing seemed to go as planned.

I started the day thinking that we would head into town early, run by Barnes and Noble (for my boys to turn in their summer reading charts), drop Captain off at the library with his tutor, take Snuggles to the doctor, pick up Captain, take Snuggles to have his blood drawn (there wasn't enough from previously to complete all the tests!), and head home for the afternoon.

After multiple phone calls, to and from everyone, my plan was totally changed. We ended up spending the morning at home since Captains class was canceled as well as Snuggles doctors appointment. The doctor still wanted me to bring Snuggles in for a weight check at 1:00 and then his blood draw was changed to 2:00. After that, the children and I spent the afternoon in town before heading home at 6:00 pm.

WE DID get some good news when we weighed Snuggles, at the doctor's office, and found that he had gained another pound since his last visit! Yeah!! That puts his weight up about 2 pounds since mid June! His doctor said he is gaining weight at the rate of a newborn baby, which is great, since he was so far behind. THANK YOU ALL FOR YOUR PRAYERS!!! I am sure we have those to thank for his weight gain! (The blood draw went well too, and they should have plenty this time to run the test. I am anxious to see how it turns out.)

Anyhow, even though we were gone most of the day, we did have a little time to celebrate the feast of St. James. My boys copied the prayer to St. James to add to their notebooks, along with a picture of him (see above), while I headed to the kitchen to bake the cake.

Does it count if I totally cheated while making the cake? I ended up skipping this recipe, and just whipping up a lemon cake mix and adding some almond extract to the batter. 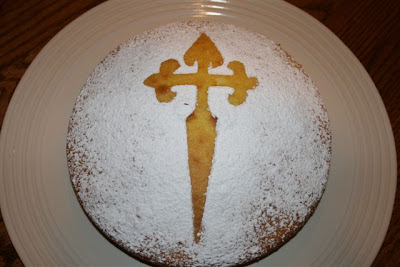 Captain said, "It smells funny, but it sure tastes good!" All the children loved how the Cruz Santiago (St. James' cross) turned out. Doesn't it look neat? Next year I will try and make the real recipe!

Oh, and the Coupe Saint-Jacques were a huge hit, as usual!

I hope you all had a lovely feast of St. James. God Bless!
Posted by Jessica Gordon