... and since I would really love some suggestions on what to eat!!! 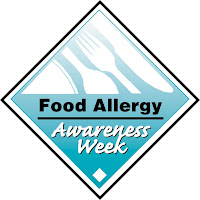 Lots of you have asked me to elaborate on the Food Sensitivity Test I had done recently. Since it happens to be Food Allergy Awareness Week, what better time than now?

I first found out about the test from some close friends of ours, who are also Rascal's Godparents. They had both taken the test, changed their diet accordingly, lost lots of weight, and started having so much more energy!

I started reading more about Food Sensitivities and found that:

Reactions to foods are not always immediate. They can occur many hours later as bloating and swelling in the hands, feet, ankles, abdomen, chin and around the eyes. Much of the weight gained is fluid retention caused by inflammation and the release of certain hormones. In addition, there is fermentation of foods, particularly carbohydrates, in the intestines which can result in a swollen distended belly and gas production. Food allergies as well as food sensitivities can cause weight gain. Yes, it's possible to have no other symptoms. You can't count on seeing runny noses or sneezes with some food sensitivities. Instead, a person's body perceives the food as a poison and limits digestion of nutrients, thus causing the body to store fat.

Symptoms of food sensitivity can include headache, indigestion or heartburn, fatigue, depression, joint pain or arthritis, canker sores, chronic respiratory symptoms such as wheezing, sinus congestion or bronchitis and chronic bowel problems such as diarrhea or constipation.

Hum... I could relate to almost all of those symptoms... The test sounded like just what I have been needing.

I had been trying hard, and eating well (for the most part) and was feeling lousy and tired almost all the time. I know that I am sensitive to some foods due to my angioedema, but I was wondering just what exactly my body doesn't like. My hubby agreed, and we made the appointment.

Since that's what he does, Rascal's Godfather actually drew my blood! For those of you that know me, I have a horrible fear of needles. I would much rather deliver a baby completely naturally than have my blood drawn or be given an IV. Although, I must say, Ed knows what he is doing!!!! It didn't even hurt! Thank you Ed!

Looking at the list of sensitivities I have, it's no wonder I hadn't been feeling well! I had been eating mostly foods that my body doesn't like. Are you curious to see my results?? I sure was!

As well as Candida Albicans so avoid: (So -- what has my diet shake been made of recently?? Let's see: Cow's Milk/Yogurt/or Orange Juice, Vanilla Protein Powder, Banana, Blueberries, and I usually throw in a few Almonds... Isn't that GREAT?!?)

Foods I CAN HAVE:

Since last Friday I have actually been able to stick to it! It has not been easy, but it is getting easier as I wean my body from its sugar dependence, and since I am feeling so much better -- and losing weight!!

Here is a picture of the groceries I came home with on Saturday: 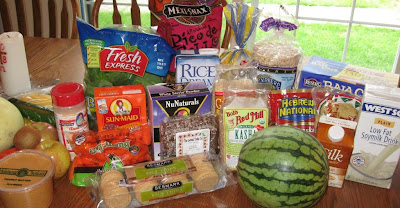 It is so hard to find things made without Sugar, Onion, and Vanilla!! I do have one cheat, and that would be that Silk Hazelnut Coffee Creamer--it has some Cane Sugar in it... If I can't get my mochas, I need to be able to replace it with something!!

Have any of you tried Corn Thins

before?? They are delicious! I also am so thankful for the Coconut Date Rolls, they aren't exactly chocolate, but they are perfect for when I really need something sweet... And I am out of them right now!!! (Yep! I ate that whole little box of calorie packed dates and still lost weight!)

Anyways, if any of you have any great recipes, snack suggestions, or food I can get "on the go," made with the items on my green list, I would love, Love, LOVE to hear them!!
Email ThisBlogThis!Share to TwitterShare to FacebookShare to Pinterest
Posted by Jessica Gordon