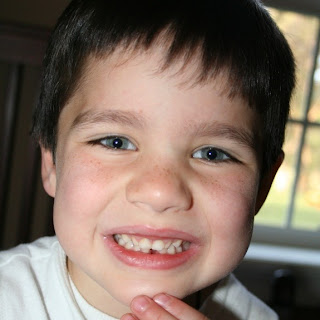 This Morning Rascal lost his very first tooth!!! He is so excited!

Although, he was a bit concerned when he realized that tomorrow is Sunday.

Thank goodness that daddy the tooth fairy is back in town!

Captain lost another tooth this past week when hubby was out of town. On top of that, our sweet little 2 year old (who will be three tomorrow!!!) lost it! Before bed, I helped Captain write a note to the tooth fairy explaining the "missing" tooth. However, I woke in the morning to Captain standing there next to my bed waiting for me to wake up. As soon as I did, he said, "Mom, the tooth fairy forgot!" (Me to myself: OH NO!!! ARGH!!) Me, to Captain, "Are you sure? Why don't you go to the bathroom and then we will check!" He said ok, and I quickly transformed into Houdini--I jumped out of bed, ran out to my desk for my purse, I only had 2 pennies and a $5... I grabbed the $5 (lucky kid!), ran to his bedroom, grabbed the note (which slipped out of my hand and is still under his bed--which reminds me, I better get it before he finds it!), I slipped the $5 under his pillow, ran back to my room and jumped back into bed, just as he walks out of the bathroom. It had to be less than 2 minutes all together. Whew! Anyhow, I then "woke up" and got up, and together we went to his room. He looked under his pillow... "OH! It must have been too dark earlier for me to see... Or maybe the tooth fairy was running late!" I replied, "Oh! Wonderful!"

Maybe we better start letting the tooth fairy know that we have a tooth instead of just hoping he'll show up! What do you think??
Posted by Jessica Gordon