Since we were in town this morning, I decided to have my dear hairdresser check Chiquita's hair. She actually said that I did a "pretty good" job, and that I am my mother's daughter... That was a complement right? ;)

Anyhow, as we were leaving, there was a little cluster of older women standing by the door. As we filed by, one of them asked, "Are these all yours?" I answered "yes." Then another said, "Wow! They are sure close in age!" I smiled and said, "yes they are." I then opened the door for the kids...

At that point they started talking to each other, as if I couldn't hear, too funny! One said, "She sure is ambitious isn't she?" To which one of the others replied, "Or INSANE!" I chuckled and continued out the door.

So, which is it, am I ambitious or insane?

I personally think that sometimes I can be very ambitious and at other times I am totally somewhat a little bit insane (mainly... after a sleepless night!)

But, regardless of how ambitious or insane I can get, when it comes to my kids, I would just say, "I've been so blessed, and I can't imagine my life without a single one them!" 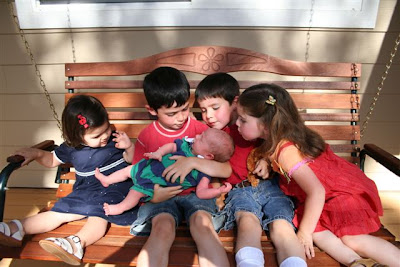