OK... I have been a rather lazy blogger this first week of January.

Partially, since I am still recovering from my bronchitis... (I am highly sensitive to medicine, and ended up having an allergic reaction to the antibiotics. But, I am doing much better!)

Partially, since I have had many doctors appointments this week, 2 for me and one for Snuggles. (I was only suppose to have one, for my bronchitis, but my doctor scheduled another for the next day, to remove and do a biopsy on a questionable mole under my arm that has been growing, as well as to freeze a few others... I now have a nice crater there, that is REALLY sore! I know, too much information... Snuggles appointment ended up taking hours as well, since he has dropped drastically on the weight chart. He will be re-weighed in a couple weeks. This can be somewhat normal for breastfed babies.)

Partially, since I have had lots of other things going on... Today we went to Mass, Benediction, Lunch with Father, Ice-Skating and then ran errands while hubby worked on getting more firewood, so we were gone from 9am to 5pm.

And partially, since I have been just plain lazy :) The things I have wanted to blog about, like my new years goals, plans for January, as well as our plans for the second half of the school year, just take too long to get all on paper, or rather screen!

Nevertheless, I have been working on those above mentioned goals and plans, as is apparent through a quick photo of my nightstand: 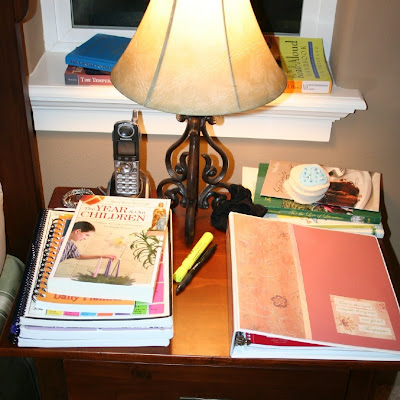 Ruth just posted a picture of her nightstand, and asked what was on everyone else's... And since I have been lazy about posting lately, I thought this would be fun! ;) You can really learn a lot about someone, by seeing what is on their nightstand, don't ya think? Or at least, what I have been up to, in my case!

Right now, on my nightstand, you will find:

A lamp, phone, some jewelry I wore for Christmas & New Years, a hair tie (of course!), a stack of unfinished sugar cookies, a pen and highlighter,

LOTS OF BOOKS! I even have a few books stashed on my window seal, behind my nightstand. As I mentioned above, I have been working diligently at creating a schedule... Some of the books I have been using as references have found a new home, on my night stand.

The pile on the left includes:

The Year & Our Children

Managers of their Homes

A Year With God

On the back of the nightstand I also have:

(A great little book that one of my aunties illustrated!)

For the Love of Literature
(I recently won this over at one of Cay's Bookwalks, and CAN HARDLY WAIT to read it!)

And, the Newest Pampered Chef Season's Best Cookbook
(It has some DELICIOUS recipes in it!)


And in case your curious, on my window seal I have:

The Temperament God Gave You

(Which my friend, Trina, loaned to me!)

The Christian Mother: the Education of Her Children and Her Prayer

(An absolutely lovely little book! It is out of print, but I highly recommend watching for a used copy!)

and The read-aloud handbook

(From the library, and recommended by my cousin.)


The last thing on my nightstand is my new "Home Companion" binder! I was motivated into making it after seeing Elizabeth's! It is definitely a work in progress, and I think it is going to take a bit of trial and error filling it up with my schedules and routines. But I have gotten a good start with the help of Flylady, Starry Sky Ranch, and Sweetness and Light.

I love how the cover turned out, so here is a closer picture: 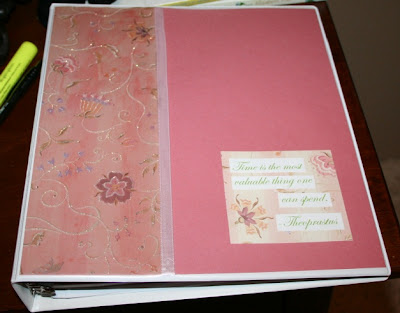 Alrighty then... I have spent too much time online, as usual... Time for me to get back to my planning. Monday will be here in no time!

Oh!! If you have some free time, WHAT'S ON YOUR NIGHTSTAND?
Posted by Jessica Gordon