More on the Brown Scapular... 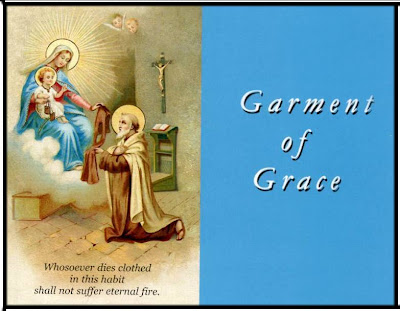 Awhile back, I posted about the Brown Scapular. Since then, I have been given (and have read) another copy of the little booklet "Garment of Grace" by my dear mother-in-law. Thank you so much! It is such a great little book. I wanted to take a second, and share one of the stories it has in it, about a miracle due to the brown scapular:

A Priest's Life is Saved
Still another Scapular miracle concerns a French priest who had gone on pilgrimage. On the way to say Mass, he remembered that he had forgotten his Scapular. He knew he would be late if he went back to retrieve it, but he could not envision offering Mass at Our Lady's altar without Her Scapular. Later, as he was offering the Holy Sacrifice, a young man approached the altar, pulled out a gun, and shot the priest in the back. To the amazement of all, the priest continued to say the prayers of the Mass as though nothing had occurred. It was at first presumed that the bullet had miraculously missed its target. However, upon examination, the bullet was found ADHERING TO THE LITTLE BROWN SCAPULAR which the priest had so obstinately refused to be without.

Isn't that amazing? This little booklet is just filled with stories like this one! It is so inspiring!
Posted by Jessica Gordon