Today is the feast of Saint John Bosco. My boys asked if we could make bread since St. John was always giving "homemade bread" to the kids...

Hum... SURE!!! Why not! So, I pulled out the bread maker, and after a quick lesson in math few ingredients and a push of the button, we will have some "homemade bread" for our afternoon teatime!

I TOTALLY thought I had ordered this book, Story of Saint John Bosco, but I can NOT find it anywhere! So, instead we read our daily story from Saints for Young People. It has a nice short story about him which I thought I would share:

St. John Bosco
St. John Bosco was born near Turin, Italy. Like many Saints, he was a poor farm lad, who was brought up by his holy mother in the love of God and Our Lady. John's father died when he was young and his mother had to work very hard to feed her family. John, too, worked as hard as he could to help his mother. He was an intelligent lad, who knew how to keep his playmates from offending God. He would do tricks to win their attention and then he would talk to them about spiritual things.

In order to become a priest, John had to work his way through school. He did all kinds of work. He was a carpenter, a shoemaker, a cook, a pastry-maker, a farmer, and many other things. At the same time he was a fine student and always happy and cheerful.

After he became a priest, Don Bosco, which means Father Bosco, began his great mission of helping orphan boys. He gathered together hundreds of these boys who had no home. He taught them all kinds of work, so that they would not steal and get into trouble. At first people were angry with Don Bosco, because they did not think those boys would turn out to be good. But he proved that they would.

"Do you want to be Don Bosco's friend?" he would ask each new boy who came to him. "You do? Then, you must help me save your soul." Every night, he wanted his boys to say three Hail Mary's, so that the Blessed Mother would help them avoid sin. He also recommended that they go to Confession and Communion as often as possible.

Later on, Don Bosco founded two Religious Orders to take care of poor children and he also built many homes and schools for them.

Let us help our parents at home as much as we can. The more things we learn to do, the better we can serve God.

We LOVE these books. I know I have mentioned them before, but they are just so great. Every day has a short story just like the one above.

The children also colored pages out of a couple of our coloring books to add to their Liturgical year notebooks... 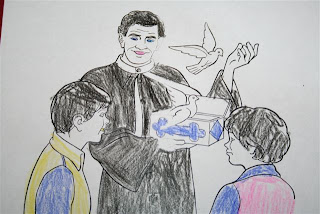 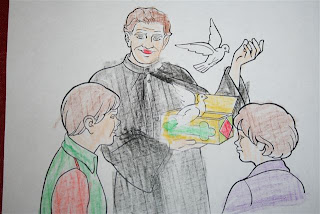 We will end the day with an Italian dinner in his honor. I have a new favorite recipe that we are loving from Pampered Chef's 29 minutes to dinner cookbook, Skillet Lasagna.

After dinner we will watch St. John Bosco: Mission to Love

once again. It is such a WONDERFUL movie!

Saint John Bosco ~ Pray for us!
"Fly from bad companions as from the bite of a poisonous snake. If you keep good companions, I can assure you that you will one day rejoice with the blessed in Heaven; whereas if you keep with those who are bad, you will become bad yourself, and you will be in danger of losing your soul." - Saint John Bosco
Posted by Jessica Gordon