This month is going by so fast! I can't believe that Advent is almost over and Christmas is almost here! Like many Catholics, we are currently praying the "O" Antiphons. An article on Catholic Culture put it so beautifully when they said that the O Antiphons are "the seven jewels of our liturgy, dating back to the fourth century, one for each day until Christmas Eve. These antiphons address Christ with seven magnificent Messianic titles, based on the Old Testament prophecies and types of Christ. The Church recalls the variety of the ills of man before the coming of the Redeemer."

Beginning on December 17, as the final phase of preparation for Christmas, the Church recites or chants the O Antiphons preceding the Magnificat during Vespers of the Liturgy of the Hours.
The O Antiphons express the Church's longing and expectation for the Messiah, her startled wonderment at the fullness of grace which the Christ-Child is about to bestow on the world. Their theme is the majesty of the Savior, His wisdom, His faithfulness and sanctity, His justice and mercy, His covenant with His chosen people, who in their ingratitude broke faith with Him. They are concerned with His power and love as King and Redeemer of the world, His relation to every soul as Emmanuel, God-with-us. (With Christ Through the Year by Bernard Strasser)
According to Professor Robert Greenberg of the San Francisco Conservatory of Music, the Benedictine monks arranged these antiphons with a definite purpose. If one starts with the last title and takes the first letter of each one — Emmanuel, Rex, Oriens, Clavis, Radix, Adonai, Sapientia — the Latin words ero cras are formed, meaning, “Tomorrow, I will come.” Therefore, the Lord Jesus, whose coming we have prepared for in Advent and whom we have addressed in these seven Messianic titles, now speaks to us, “Tomorrow, I will come.” So the “O Antiphons” not only bring intensity to our Advent preparation, but bring it to a joyful conclusion. (Fr. William Saunders)

There is an old monastic custom of providing special treats, representing each of the "O Antiphons," leading up to Christmas. This has been a tradition in our home for a few years now. It is such a fun way to teach the children about them and increase their excitement as Christmas gets closer! Here is what we have been doing so far... in addition to what we have planned for the rest of the week as we finish preparing for the Birth of Christ!

O Wisdom that comest out of the mouth of the Most High, that reachest from one end to another, and orderest all things mightily and sweetly, come to teach us the way of prudence!


Since the symbol for wisdom is a book, we purchased a new prayer book for our family... I ordered it awhile back and was worried that it wouldn't arrive in time! It arrived on the 17th! How perfect was that. The prayer book we choose this year is called Novena: The Power of Prayer. I have purchased it a few times in the past for gifts, but still didn't have a copy for us! I LOVE it! Not only does it contain many novenas, it is filled with beautiful pictures and stories of the saints as well.


O Adonai, and Ruler of the house of Israel, Who didst appear unto Moses in the burning bush, and gavest him the law in Sinai, come to redeem us with an outstretched arm! 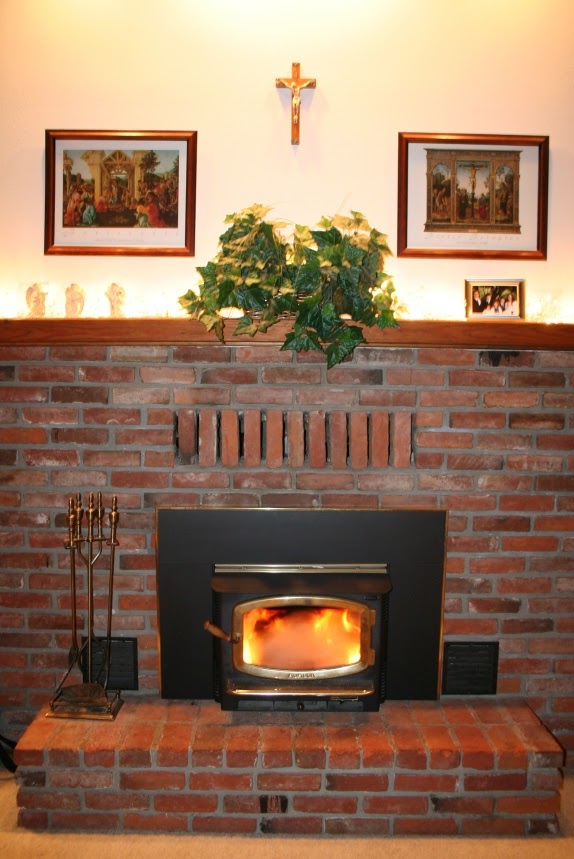 We planned on making smores outside, but, due to rain, I baked a pie while my husband lit a fire in the wood stove and then we all watched a family movie together. It's very rare that we watch a movie together with the kids, and we all really enjoyed it!


O Root of Jesse, which standest for an ensign of the people, at Whom the kings shall shut their mouths, Whom the Gentiles shall seek, come to deliver us, do not tarry. 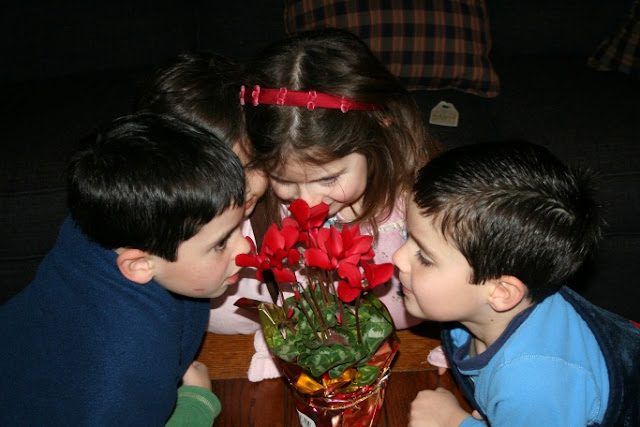 Since the symbol for today is a flower, I usually buy our Christmas Poinsettia today. However, after reading this post, I decided to pass on the real poinsettias this year and maybe make paper poinsettias ... But, instead, my husband was such a dear and brought home some beautiful red cyclamens! As the kids were smelling the flowers, I heard one of my boys say, "I don't smell anything... except someones bad breath!" (I then sent them all to brush their teeth!)

O Key of David, and Sceptre of the house of Israel, that openeth and no man shutteth, and shutteth and no man openeth, come to liberate the prisoner from the prison, and them that sit in darkness, and in the shadow of death.


Since this is initially a monastic tradition, and on this night, the monk in charge of the wine cellar would provide a special bottle of wine. We will be having some special drinks with dinner! If I can get to the store we may even have a key lime pie!

O Dayspring, Brightness of the everlasting light, Son of justice, come to give light to them that sit in darkness and in the shadow of death! 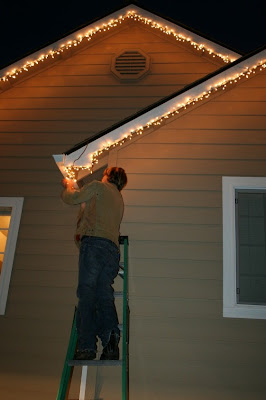 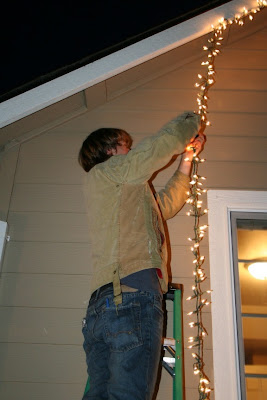 Since this O Antiphon refers to light, we will finish putting up our outside lights. (We wait to turn on our lights outside, as well as on our tree, till Christmas Eve. You can read my husband's post on this, if you'd like.) They are actually almost done, I just want to do a few trees in the yard and need a few extension cords. Actually, we are really lucky to have one of my brothers who actually installs Christmas lights for a living! (The rest of the year he does landscape lighting and events such as weddings) He is always super busy during the Christmas season installing lights, not only for homes, but city and business lights as well! A few years ago he had to leave my parents early Thanksgiving night "for work"... Anyways we drove home to find our house completely lit up! As one of our neighbors put it... It looked "awesome!" Each year since, he has put up our lights as a Christmas gift to our family. This year it is pretty simple, he just outlined the roof line, but still looks quite lovely!

After the kids are in there pajamas, we will surprise them with a trip to town to see some of the lights! This is always such fun, and I am looking forward to it too! :)


O King of the Gentiles, yea, and desire thereof! O Corner-stone, that makest of two one, come to save man, whom Thou hast made out of the dust of the earth!

Today I am going to surprise the kids with a new "king" puppet! Actually I purchased a 4 pack from discovery toys, but I am going to save the other 3 for Christmas. My kids love acting out puppet shows. Also, during craft time, I think we will be making these crowns! 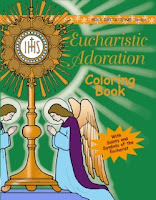 O Emmanuel, our King and our Law-giver, Longing of the Gentiles, yea, and salvation thereof, come to save us, O Lord our God!

This is the last of the O Antiphons... Tomorrow will be Christmas Eve! The treat for today is going to be a couple new coloring books on Christ and the Eucharist. They are called Holy Name of Jesus and Eucharistic Adoration. We have the Mother of God Coloring Book from these publishers as well, and it is beautiful!

You can also listen to the O Antiphons beautifully chanted in Latin here.

Reading other blogs, I have found so many wonderful ideas that I hope to incorporate in the future. There is a wonderful post on the O Antiphons over at O Night Divine. Also, go check out Ruth's blog to see all her wonderful ways of celebrating the "O Antiphons." I just love her "O Antiphon" House. I definitely want to make one for next year!﻿ 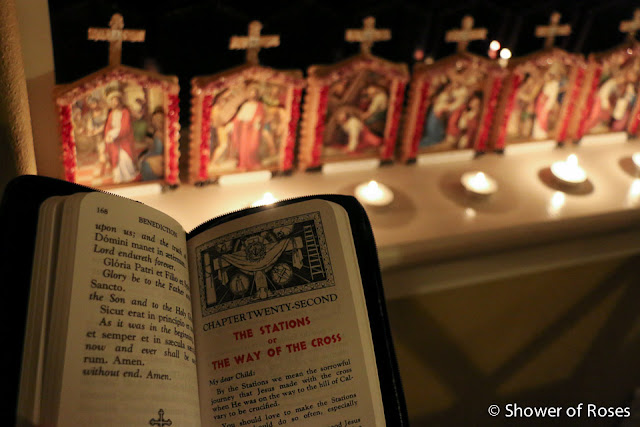