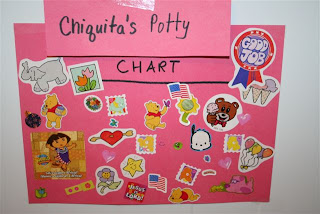 After some encouraging words from Regina last Wednesday, I finally decided to just go for it and potty train Chiquita. I took her out of her diaper and put her in panties which she was VERY excited about, but in no time I was cleaning up accidents all over the house! She seemed to be waiting for the one moment I was tied up with something else. What had I gotten myself into?!?

Thursday was a bit better, she only had two accidents in the morning. (This was after she woke up in a drenched bed and my DH was saying that those pull-ups don't work. And then realizing that she had a swim diaper on. Ooops!)

After that, she was so cute, when I would ask her, "Do you have to go potty?" She would answer, with the sweetest look," Um... Maybe!" On Friday, she had an accident, but it was really my own fault. It was the first time she had been out of the house and I forgot to put a pull-up on her. I did take along the potty chair (there is no bathroom at the church) and she did fine during Mass. But then I forgot to ask her if she needed to go, while we were at the coffee shop, till it was too late and she had had an accident, the poor girl.

Since then, however, she hasn't had any more accidents, including being out and about on Sunday once again with no pull-up! PLUS, she now goes all by herself, with no prompting or reminding from me. Sooooo, I think it is safe to say, Chiquita is now potty trained! It is so nice to have **only one** in diapers! (Much better than 3 kids in diapers, like we had when Chiquita was born! That was so expensive!)

Thank you Regina!
**Each sticker represents a success this past week... It's time to retire the Potty Chart, and hopefully we won't need one of these!**
Posted by Jessica Gordon