Back to School Giveaway :: Ave Maria 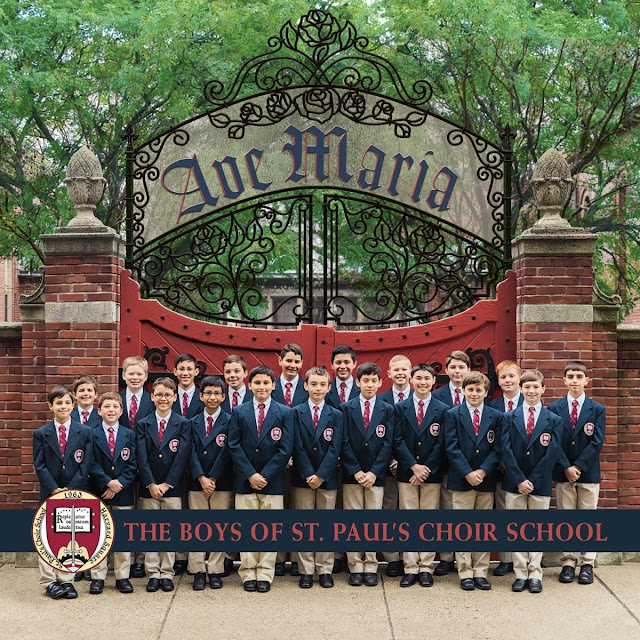 This beautiful collection from The Boys of St. Paul’s Choir School in Harvard Square will be released on Our Lady’s Birthday! Enter the giveaway below for a chance to win it before you can buy it!
Press Release:

On the heels of having several #1 Billboard Classical Traditional albums, De Montfort Music teamed up with sister label AimHigher Recordings and Sony Classical in the recording of the angelic music of Ave Maria by The Boys of St. Paul’s Choir School. The album will be released on September 8, 2017. It is available for preorder now. This will be the second international release for the Choir School- who topped the Billboard classical charts, and became a media favorite with their 2014 release Christmas in Harvard Square. They have been featured on CBS This Morning, NPR, Good Morning America, Fox & Friends, WGBH, Boston Globe and even had their own PBS Special. Having recently celebrated their 50th anniversary, Saint Paul’s Choir School in Cambridge, Massachusetts strives to engage young men in the development of their intellectual and musical talents. Located in the heart of Harvard Square, the school has had a large presence and impact within the Harvard community. The school seeks to develop the diverse musical talents of each boy so that he may use his musical gifts serving the community at large by the performance of master works of choral literature.

Founded in 1963 by Dr. Theodore Marier, an internationally acclaimed choral scholar, Saint Paul’s Choir School is the premiere musically intensive boy choir school, which educates choristers in grades 4 through 8 in the United States. The Choir School seeks to embrace the great cathedral school tradition as it unites a rigorous musical and academic curriculum preparing each student to grow and flourish in a dynamic and changing world.

Having performed frequently with the Boston Symphony Orchestra, with many notable conductors including Itzhak Perlman, and having performed on the road from Carnegie Hall to St. Peter’s Square at a papal audience for Pope Francis to Red Sox and Celtics games, the boys of St. Paul’s Choir School have covered much diverse and musically challenging territory.

Saint Paul’s Choir School —identifies and accepts boys from the greater Boston area as well as the entire United States, who are musically talented and academically qualified. Students are offered an intensive musical training and a rigorous academic program.

The Boys of St. Paul’s Choir School are at an apex of greatness under the musical direction of Mr. John Robinson, who hails from the UK and came up in the boys choir schools in Cambridge, UK. The community is led by Fr. William Kelly, himself once a choirboy student at St. Paul’s.

Ave Maria will be released on AimHigher Recordings through their international distribution collaboration with Sony Classical. The creative forces behind the album include multiple Grammy Award-winning Producer Christopher Alder, and Brad Michel, also a Grammy Award-winner. Choirmaster John Robinson masterfully directed the presentation of the repertoire. Bursting with the transcendent sounds of this choir of boys and men coupled with the glorious acoustic of St. Paul’s in Harvard Square, every selection on Ave Maria tells a story. Each beautiful and interesting choral work has its own history. Perhaps none more significant than that of the inspiration for Palestrina’s Missa Pappae Marcelli or of the extraordinary depiction of the Magi from the East in ‘Reges Tharsis,’ on to the vivid and dramatic use of harmony in Bruckner’s ‘Virga Jesse floruit.’ One thing is clear, this beautiful music has a stream of inspiration running clearly throughout. Dvorak and Rachmaninoff are such well-known names, however Rachmaninoff himself called ‘Bogoroditse Dyevo’ a favorite of his own works.

De Montfort Music has generously offered to send FIVE of my visitors here at Shower of Roses a copy of this brand new CD!


Please enter the giveaway using the Rafflecopter box below:


Pre-order a copy of Ave Maria over at Amazon!