The I-Just-Can't-Keep-It-A-Secret-Any-Longer Edition!
Capturing the context of contentment in everyday life.
{pretty} 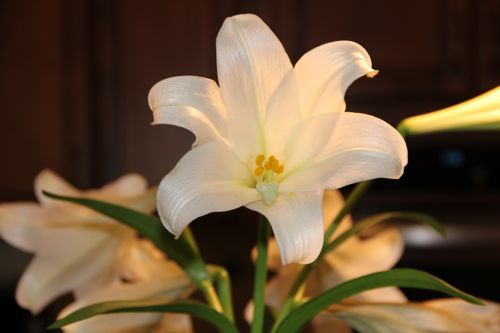 "The Madonna Lily is a symbol of purity, and became known as the Madonna Lily, the white ones being associated with the Holy Virgin by Christians. Christians believe that the lily had been yellow until the Virgin Mary picked it up. Lilies are a symbol of fertility.  Dreaming of lilies in spring signifies marriage, happiness and prosperity..." 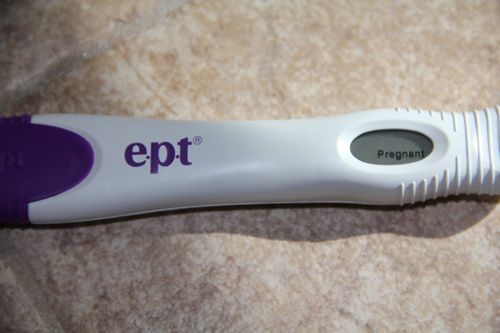 After taking two tests and seeing a very, very, faint second line (the first just before decorating a Nesting Doll Birthday Cake - wasn't that appropriate?!? - on Tuesday of Holy Week and the second on Wednesday morning just before celebrating a birthday), my friend Jamie (our contractor's wife) showed up with a digital test

on Holy Thursday.  Yep... That one definitely says "Pregnant!"

A snapshot of one of the online due date calculators I used to see when I might be due. . .
the doctors office confirmed this when I scheduled my appointment.
Can you believe that?!? December 25th, Christmas Day?!?  That was the very same due date that I had with our last baby, who will turn 2 this December. . . In fact, last year I said a number of times that "I really should have a baby every Christmas, because I was so much more organized last year. . ."  I guess Our Dear Lord and St. Therese have a sense of humor, or they took my little "joke" as a prayer!   I guess it is time to start getting ready for Christmas! ;)
Other funny/interesting moments:
The email that I received in March from a friend who had just had "two very vidid dreams" in which I was announcing that I was pregnant...
My Aunt saying that she already knew when I told her last Sunday. . . She said she could tell from my voice the last time I spoke with her, on Palm Sunday, and that when she hung up the phone she turned to her girlfriend and said "She's pregnant!"  I didn't even take the very first test until a couple days later!
Snuggles (after finding out about the baby) asked "Mommy, is the baby in your tummy a girl or a boy?" After I replied that I didn't know yet, he proceeded to put his little mouth right next to my tummy and yell at the top of his lungs "ARE YOU A GIRL OR A BOY????"

{real}
Our children's excitement as we told them, on Easter Sunday, of the precious Christmas gift that is already on her/his way!

"My facial features start to form,
and dimples mark my ears.
Tiny buds will be my arms and legs
A beating heart appears."
~Week 6, The Miracle of Me

Please remember us in your prayers!!!
Visit Like Mother, Like Daughter for more pictures of contentment!
Posted by Jessica Gordon