“My son, your sins are forgiven.” 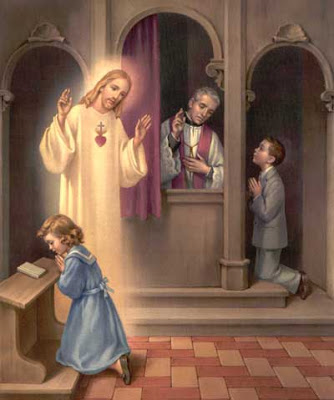 "And they came, bringing to him a paralytic carried by four men. And when they could not get near him because of the crowd, they removed the roof above him; and when they had made an opening, they let down the pallet on which the paralytic lay. And when Jesus saw their faith, he said to the paralytic, “My son, your sins are forgiven.”
~ Mark 2:3-5 (From the Gospel Reading for Feb 22, 2009)

Back in November, after coming home from the doctor's office and having to tell my children that our little one had gone to heaven, my boys took it much harder than I had expected... I had a hard time consoling both of them. I pulled Rascal up into my lap and asked him what was wrong. Through his tears he said, "Mom, I am just so scared that I am going to die before I am able to make my First Confession, and that I am not going to be able to go to heaven and meet our baby."

Even though I call our second son "Rascal" here on my blog (he can be a little stinker at times), he is such a sweet sensitive little guy. I remember back when he had just turned two and hubby and I had put our 3 children (at the time) to bed, Rascal would usually talk or sing himself to sleep. Well, I heard him talking in his room, so I peeked inside and then called hubby over look. He was kneeling beside his little toddler bed talking to Jesus, on the cross above his bed, and telling him "I'm two!" while holding up two of his little fingers. I let out a little giggle, which Rascal heard, and he jumped back into his bed.

Yes, ever since he was baby he has loved Our Lord dearly. When he turned five he began serving Mass on Fridays with his older brother, in addition to "playing Mass" at home. He has been anxiously awaiting being able to receive his First Holy Communion, and more recently has had a great desire to make his First Confession.

Back to November... We knew that Rascal was ready to make his First Confession, but we weren't sure what we could do. We had tried to put him in a First Communion class last September, but since he had not been in the program the year before as well, the DRE placed him in the younger class, and said that he would have to wait until next year. It's a long story which I would rather not go into, but I'll just leave it with the fact that we didn't have very many options, and had been considering taking a trip to visit one of my brother-in-laws! ;)

Well, I had the opportunity to speak with a new priest in our area, whom I was able to meet with right before and after my miscarriage. I brought up Rascal and his desire to make his First Confession, and he said he would see what he could do. To make a long story short shorter, I received a call from him on Friday afternoon saying he could do the First Confession and First Communion Sunday morning!!!

OH!!!! WOW!!!! Even though Rascal was ready, I wasn't! ;) I would need to invite our family and his God-parents, find a suit, find the First Communion tie (which would take until right before we had to leave on Sunday), order a cake, buy a gift, and so on, and I would only have Saturday to do so (which was already filled with other plans!)! But, how could we say no?!?! Rascal was SO excited! And I had a panic attack! ;)
So, yesterday morning, bright and early, Rascal made his First Confession and then received Our Lord for the very first time! He has just been glowing ever since!

I do have a few pictures to share, but right now I need to take care of Captain and Twinkle Toes who both came down with a fever last night. Hum, my children all got sick right after our last First Communion too... Hopefully this time won't be as bad, and I will be back soon!

Lord Jesus Christ, in the Sacrament of the Eucharist You left us the outstanding manifestation of your limitless love for us. Thank You for giving our child the opportunity to experience this love in receiving the Sacrament for the first time. May your Eucharist presence keep him ever free from sin, fortified in faith, pervaded by love for God and neighbor, and fruitful in virtue, that he may continue to receive You throughout life and attain final union with You at death. Amen. 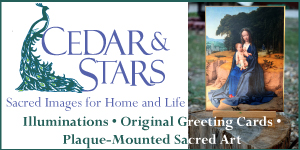 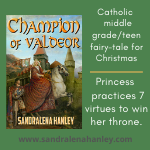