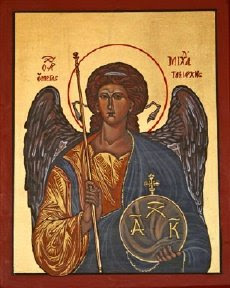 "The name of this Archangel means "who is like unto God?" In the Old Covenant he is made known to us as the "great prince," the protector of the children of Israel (Dan. 12, 1). Through the New Testament the Church continues this patronage of Michael (Apoc. 12, 7) and has always venerated him as the guardian angel of the kingdom of Christ on earth, as the heavenly leader in the fight against all enemies of God. For this reason he was the special patron of Christian soldiers fighting against pagan armies. In the fierce battles of the imperial troops against the heathen Magyars in Bavaria (933 and 955) Saint Michael’s help was invoked by all fighters with prayer and song and battle cry, and the victory was gratefully attributed to him." ~ Catholic Culture

Here is what we will be doing to celebrate the feast of this great Saint:

Our family will be celebrating a nameday on this feast and so we will be saying the following prayer found in My Nameday, Come for Dessert

by Helen McLoughlin. (I believe that this book is out of print, but I was able to find an inexpensive copy on Amazon, and it is also available online here.)

Father: The Lord, King of archangels.

All: Come, let us adore, alleluia.

Father: I looked up and saw a man standing there clad all in linen and his girdle was of fine gold. Clear as a topaz his body was, like the play of lightning shone his face; and like burning crossets his eyes; arms and legs of him had the sheen of bronze, and when he spoke, it was like the murmur of a throng.

All: He bestows favors on those nations who honor him, and his prayer leads them to the kingdom of heaven, alleluia.

Father: The angel Michael, chief in paradise, to whom the angelic citizens pay honor.

All: Most glorious prince, archangel Michael, be mindful of us here and everywhere; pray ever for us to the Son of God, alleluia, alleluia.

Father: From the writings of Pope St. Gregory the Great:

Michael means "Who is like God!" When any work of remarkable power is to be done, we are told it is Michael who is sent, that from both his action and his name we may understand that none can accomplish what God in His might accomplishes.

All: Salvation belongs to our God, alleluia.

Father: Let us pray. O God, who ordained the services of angels and men in wonderful order, be pleased to grant that our life on earth may be guarded by those who stand always ready to serve You in heaven. Through Christ our Lord.

In her book Cooking for Christ

, Florence Berger shares the tradition of making waffles baked in a Guafrette Iron for Michaelmas Day. She says, "Our family has not yet invested in a true French Gaufrier, but we use a waffle iron to make an American version of St. Michael's Gaufres. The recipe is like that of waffles." I think I will follow her lead and do the same! :)

Blend eggs and sugar. Add flour and milk alternately. Beat hard. Add butter and vanilla. The mixture is thin and should spread evenly on the preheated iron. If Gaufres tend to stick, butter both sides of the iron. Serve hot or cold.

We will be topping our breakfast "Gaufres" with Blackberry Syrup. Doesn't that sound yummy? In A Book of Feasts and Seasons

, the author, Joanna Bogle, says that "It is a tradition that blackberries are no good to eat after September 29th because 'the Devil spat on them when he was cast out of Heaven into Hell on Michaelmas'! So the days just before Michaelmas are your last chance for bottling blackberries and making blackberry jam." I had hoped to take the children blackberry picking, but we just haven't had the chance. However, I was able to pick some up from the market! ;) I love blackberries!

Now for dinner... I read on Fisheaters, that "geese were, at least at one time, plentiful during this time of year, so roast goose dinners are traditional (eating them on this day is said to protect against financial hardship, according to Irish and English folk belief). It was also the time (at least in Ireland) when the fishing season ended, the hunting season began, and apples were harvested, so eating apples today with that goose would be a nice touch." I have no idea where I can find us a goose, so instead, I will be making one of our favorite dishes, Apple Chicken and serving it with steamed baby carrots and angel hair pasta.

For dessert I *LOVED* the idea of making devil's food cake and letting the children stab it with little swords! I can't remember where I first saw this idea (most likely from Mary or Jenn), but I know my children, especially my boys, will be in heaven. ;)

. Now if I could just find those little cocktail swords I bought... I guess we can always break out the box of playmobil! 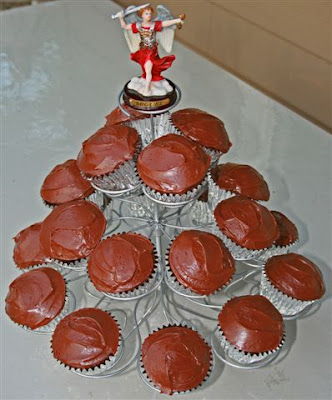 I was so excited that this little statue of St. Michael from my
Mother-in-law fit perfectly at the top of the stand.
There are so many wonderful traditions and recipes linked to this feast! I am looking forward to trying out more recipes and ideas in the future, and if you would like some more inspiration, don't miss the post at Catholic Cuisine! 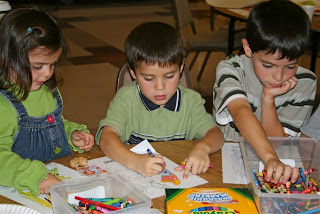 What would be more fitting than the St. Michael prayer? This prayer was written by Pope Leo XIII after he had a vision of the battle between the "Woman clothed with the sun" and the great dragon who tried to devour her child at birth, in the Book of Revelation.

I downloaded this pdf (thanks Jenn!) for the children to color, and then copy (or cut & paste for my younger ones) the St. Michael prayer onto. It's perfect! They will each add it to their Liturgical Year Notebooks.

Saint Michael the Archangel, defend us in battle. Be our protection against the wickedness and snares of the devil. May God rebuke him, we humbly pray; and do Thou, O Prince of the Heavenly Host - by the Divine Power of God - cast into hell, satan and all the evil spirits, who roam throughout the world seeking the ruin of souls. Amen.

I hope you all have a very wonderful Michaelmas!!