An Update on our Snuggle Bug 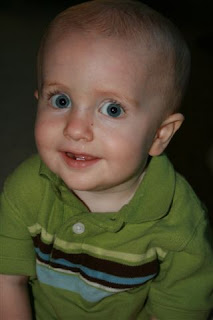 On Friday I took Snuggles in for his One-Year check up. This was actually his third visit with the doctor since we arrived home from our trip. The first was due to his not recovering completely from the flu, and at that appointment we realized how little he weighed, 16lb 11 oz pounds. To put this in perspective, he weighed 8lb 5 oz at birth, and 16 lbs at 6 months. It was a HUGE drop on (or rather OFF) the growth chart. The doctor ran a few labs which came back negative, and with the help of some probiotics, we were able to stabilize his digestive tract. The doctor gave me lots of food suggestions to help him gain weight, and I took him in for a recheck the next week. He was back up to 17 lb 9 oz. This was very good, but still nowhere near where he should be, and still below 0% on the weight chart for his weight at this age--although his head is still measuring in the 85%. The rest of my children are on the small end of the charts, so generally we wouldn't be too concerned, but Snuggles has gone from being our biggest baby to being our smallest. At Friday's appointment, he weighed only 17 lb 10oz. Anyhow, we decided to go ahead and run a panel of tests to see if there was an underlying reason that is hindering his weight gain. Especially with everything he has been eating! The doctor wanted to look at a number of different things including his thyroid and various allergens. It was awful taking him to have his blood drawn, but I did take him to a good friend of ours though, who is excellent with babies. It was still sad to see him have to go through that, but it didn't take long for Snuggles to be back to his sweet, smiley self, as you can see. I will be meeting with the doctor again in a couple weeks to find out his results. After finding out about all my food sensitivities, I am wondering if this could be the case for Snuggles. I guess we will see. I will keep you all updated. Thank you all for your prayers!
Posted by Jessica Gordon