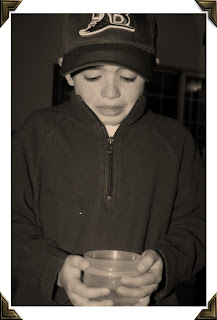 Today was a very traumatic day for the boys.

It hit Captain hard. He is such a sweet, sensitive boy, and he has never really been faced with death. He has been to a few funerals in his life, but not of anyone he has known, and so he has yet to feel the pain of losing someone.

He noticed first that his fish had stopped swimming. Oh no... I had thought he was doing better. Then it got worse, since the other fish started biting at him... Do fish do this??

Anyhow, Captain sobbed. He hid under his blankets, and I tried to comfort him. It is ok to be sad. I'm glad that my boys are still sensitive enough to care. They are such wonderful kids.

He said, "He was my very first pet, and he didn't live long at all!"

Then it was Rascal's turn to be upset. He was sad for his older brother, and mad at his own fish. Through his tears, he told me, "Mom, we need to rename all the fish "Bullies" since they were mean to Captains fish!"

After dinner, the boys had a private burial with daddy. Incense and all. Captain decided that he wanted to bury Mr. Peter Nemo near the pond, since fish like to swim.

When they came back in the house, I tried to cheer them up with some hot cocoa and cake, since it was SO cold outside. (It SNOWED today! In APRIL!) It helped... a little.

Well, I better get back to finishing Chiquita's cake... It's getting LATE! I hope you are all having a wonderful weekend!

Email ThisBlogThis!Share to TwitterShare to FacebookShare to Pinterest
Labels: Pets, Shower of Photos