SO... We now have pets!!!! This is a very first for our family!! I have always said that I have more to take care of than I can handle without pets, so why would I choose to add pets to my list of things to take care of... But, my kids have been begging for a pet, and when I saw that this weeks Garden of the Good Shepherd theme was based on "The Wind and Sea Obey Him," and that one of the days was based on fish, I couldn't help but think it would be a perfect time to try out having a pet fish... That shouldn't be too hard, right?!? At least till I have to deal with cleaning the bowl, ick!

We were going to start with just ONE, but when we got to the pet store and the little fishies were only .28 cents each. I splurged and bought 4. One for each of my children excluding Snuggles, who really didn't mind. 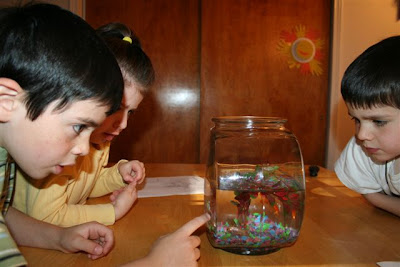 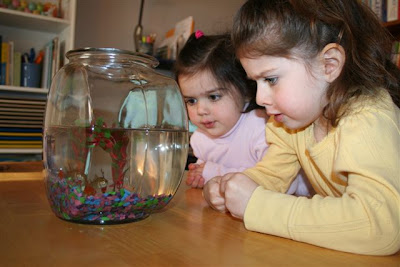 The kids LOVE their fish. 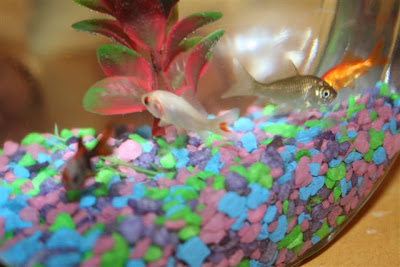 If you look closely you can see them all in this picture. It was so fun having the kids name their fish!

On the far left you can see Chiquita's fish. He is Orange and Black. At first she was going to name him Diego, but then decided on Flower, or rather Fwower!

Next you can see Twinkle Toes White fish. She, of course, named her fishie Princess.

The gray/silver fish is Rascals. He was named Sparkle.

The fish on the far right, the orange one, is Captains. Captain said, "I think I want to name my fish Peter, since Peter was a fisherman and a Fisher of Men..." (I was thinking, wow!!! great!!) Then he continued, "Orrrr, maybe Nemo!" He is still trying to decide which, and in the meantime, he has been calling his little fish "Mister."

Thankfully, the fish survived their first night in our home!
Posted by Jessica Gordon

Email ThisBlogThis!Share to TwitterShare to FacebookShare to Pinterest
Labels: Garden of the Good Shepherd, Pets, Shower of Photos