The First Saint of Ireland 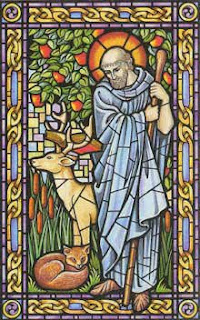 "Of all green Ireland's saints, Ciaran of Saighir was first. Born on Cape Clear Island at the very beginning of the sixth century, his first years were spent in prayer and worship to a God whose name he did not know. Called to Rome, he traveled the long and dangerous journey to what was then the center of Christian studies. Sometime around 538, he was ordained a bishop and sent back to Ireland, encouraged by Saint Patrick, who promised to follow him. At Saighir, Ciaran lived as a hermit, but soon he gathered to himself not only a following of animals, but also many monks and nuns."
Author's Note from Saint Ciaran: The Tale of a Saint of Ireland

Today, March 5th, is the Feast of St. Ciaran. Thanks to Cay's lovely suggestion, we read the story:

Saint Ciaran: The Tale of a Saint of Ireland.
We all really enjoyed learning more about this little known Saint!

The boys were especially impressed by all the animals that befriended St. Ciaran. Rascal, who loves to draw, set to work on the following: 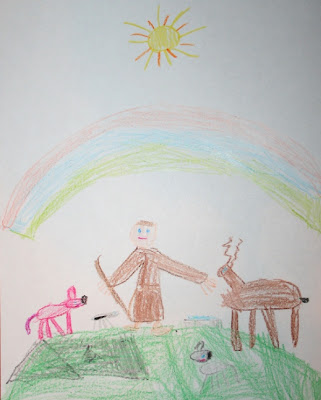 Well, I hope you all had a lovely day!! It was just BEAUTIFUL here!!!

St. Ciaran ~ Pray for us!
Posted by Jessica Gordon