From the Jesse Tree to the Jesus Tree

During Advent, one of our favorite ways to prepare is through the study of the Old Testament through the use of our Jesse Tree. Last year, I thought it would be so neat if I could find something similar to do during Lent. We do make a Lenten calendar each year, which I will try to share with you soon, but I had been wanting to do just a bit more. Anyhow, I ran across a great kit for a "Jesus Tree."

It was just what I was looking for... welllll... ALMOST!
Like Cheryl, I missed that key little word "kit" and so I thought it would arrive as pictured, all ready to go. Instead, I received a package of felt and a stack of patterns, the day before Ash Wednesday no less, which has been sitting on a shelf in the closet ever since. Well, this past weekend, I pulled out the kit and scissors, and got started! 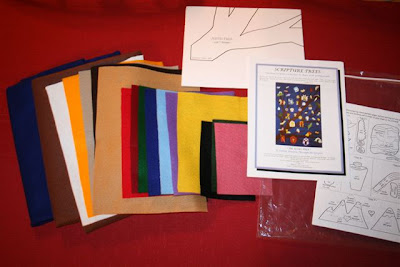 Our Lenten Bible Study will pick up where our Advent Bible Study left off. Each day during Lent we will read a Bible story from the New Testament about an event or teaching during Jesus' life from His Presentation in the temple to His death and Resurrection. Like our Jesse Tree, we will have a felt symbol to represent each story. Instead of placing them on an evergreen tree like we did in Advent, they will be placed upon a dead, barren branch, also made from felt.

At first, the dead branch symbolizes the barren and lifeless feeling of the Lenten season as we reflect on our own sinfulness and the crucifixion of our Lord. As the season climaxes with Easter, we see the gift Christ gave us through His death and Resurrection. The beauty of that new life is reflected in the way the dead branch has "blossomed" with all the symbols of Christ's life and teachings.

To begin the project, I started with taping the tree pattern to the brown felt. You could use pins as well, but I didn't have any, and I think that the taped edges made cutting the felt much easier! 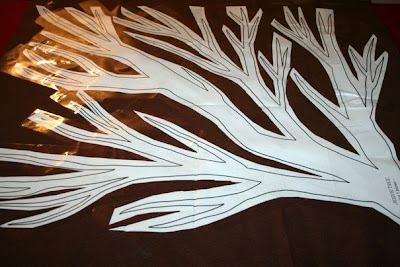 Next I glued it to the blue felt banner with some spray adhesive. I think tacky glue would have worked even better, but I am out. I still need to press it, and I'm not too happy with the photo--I think it looks better in person--but here is a photo anyway. 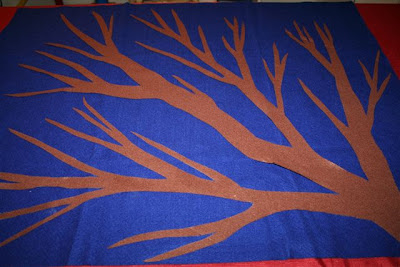 Like our Jesse Tree, I plan to hang the banner on the wall. I'm not sure if I will use a dowel and some cord, or just pin it up... It will depend on if I can get back to the craft store in this crazy weather.
**I suppose you could make this on your own, but the patterns came in so handy... In case any of you would like to purchase the kit, I ordered it from Scripture Trees. There phone number is 651-426-2174. Last year, the kit was only $10.00 plus shipping.

As I make the felt symbols I will post pictures and the corresponding bible stories. There will be 47 in all, one for each day starting from Ash Wednesday and ending on Easter Sunday.

In the meantime, I would love to hear what you have planned for Lent!
Posted by Jessica Gordon